Nils Feldhus is one the most productive and talented fellow mix producers that I know. He hosts two shows on Proton and Frisky Radio and have been curating ambient and atmospheric electronic music mixes under Helioscope and Planetarium brands since 2011 (right around the same time I started making mixes under the DJ Seroton pseudonym).

I’m especially a fan of his Planetarium selections, which share a lot of the same ambient feel as my Calm Pills (and previously Drifter) mixes. I approached him and he was happy to have me guest mix on his show. I think this turned out to be one of the best ones I’ve created and I hope you like it too.

I would also like to dedicate this mix to my friend Alaeddin Naasani. I’ve known him since college and I was surprised that the day I silently put a “tip me” link on my website (for fans of the show who want to show their support and appreciation), he was the first to do so with a generous amount that I proceeded to use to buy the songs featured on this episode. Thanks Alaeddin! 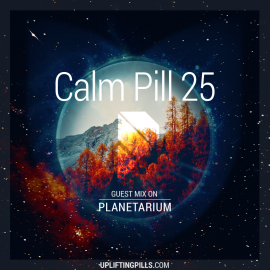